I wipe the beads of sweat running down my eyebrow. An invisible cloud of aerosol pervades the air around us. Roasting like fresh meat on the grill, we gather in the enclosed Msida courtyard. Slowly getting burnt in the Maltese afternoon sun, it’s graffiti day.

We are watching Aleksandar Vojvodic aka The Mister Pink through the window of an empty room, spray paint in hand. As a part of open office week for Underground Sound and Caine Tattoo, the walls are getting a fresh coat from this talented ex-pat graffiti artist.

The year was 1994 when Aleks was born as the first triplet, one and five minutes before his sisters in the Višnjička Banja neighborhood of Belgrade. His story almost ended short when he nearly died coming out the womb feet first – perhaps saved by one of his sisters kicking him in the head. This was the beginning of a tough upbringing that brought him closer to the world of street art.

Serbia went through hard times in the ’90s. The country’s unfortunate socio and geo-political situation meant alcoholism, narcotics abuse, and violent crime skyrocketed in the capital. This was especially so in Belgrade’s Karaburma, an inner-city town infamous for its tough character overlooking the Danube. Aleks grew up there.

He started scribbling at a young age and got familiar with the brushstrokes of the artists tagging the streets of his neighborhood. Soon he started to recognize quality and began painting his own murals.

Aleks saw an opportunity in the abandoned buildings of his city, transformed spaces into living quarters, hangouts, clubs, and even art galleries. These spaces were squats and were hard to keep entirely safe from theft. Twice he lost everything he had created and had to start all over again.

Life brings Aleks to Malta. And with much persistence, he contacts us – ready to paint. Armed with cans of spray paint, fueled by smokes and munchies, he gets to work.

It’s hot as hell and our ever-faithful crew supports this guy as he climbs up the ladder, detailing his new oeuvre. By support, I mean they are sitting, smoking, and drinking in the overbearing Maltese heat, while the man gets down and dirty.

Being of dual Serbian-Hungarian nationality, Aleks certainly has a Danubian sense of design –a real feel for naturally forming shapes. While I lived in Budapest I felt this innate attention to detail in the murals and art that I saw. Aleks reminds me of this.

As it gets dark Aleks puts the final touches of bright red paint onto our logo, now throw onto the wall. We chill to his choice of music.

“I share what I like. Whether it has a strong message or is radical, I’ll show the world – the art I make included.”

If you are interested in graffiti work, contact us and we’ll put you in touch with the man they call The Mister Pink. He is able to paint just about anywhere and anything and will add that Danubian flair to it.

From 8-12 August Underground Sound will be hosting Malta’s first meme exhibition, The Meming of Life, for the sake of midweek comedic relief.

The Meming of Life begins this Wednesday from 5 to 8 PM running until Sunday with extended hours on Saturday and Sunday. Featuring a lineup from the Tale Crew, Music Playground, Mixu Presents the Hip-Hop Loft and DJ Ben Sandy expect Underground Sound to mix up your week. 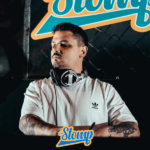 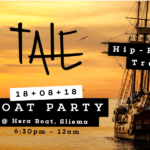