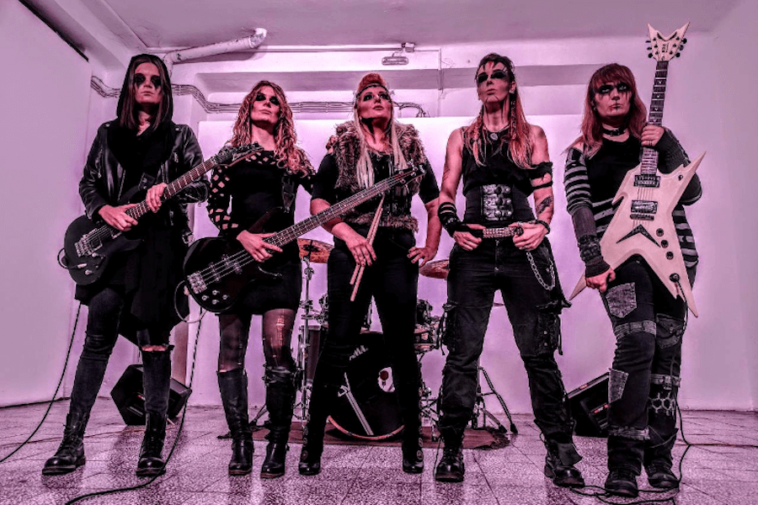 Nemesis is an all-female melodic metal band from Serbia that oozes feminism, persistence, killer riffs and a big stage presence.

Whilst I’m in Serbia I took the opportunity to reach out and have a chat with Vocalist Sanja Drca and drummer Selena Simic.

Formed in late 2013 in Belgrade, It wasn’t until 2016 that they started to gain recognition with their self released first official single, “Vengeance”. A move that shifted them away from doing covers.

Since the formation of the band, myself and the girls had the goal of composing our own songs. We had many ideas about riffs, groves and the lyrical content we wanted to be known for.

Choosing to be patient they dedicated their first three years to developing the band strategy. As well as becoming familiar with the stage and each other, before eventually opening their style to the fans.

How did Nemesis find their own sound?

Each member of Nemesis has their own musical taste. Each member brings their own inspiration to the musical creation process which shows in the finished sound. However, it’s easy to hear Arch Enemy, Creator and in Flames. Bands that have made a big impact on the sound that Nemesis produce.

“I believe that our second album will bring our authentic sound closer to our audience, since our fans have already started recognizing some of our musical trademarks”.

Not much makes sense to Nemesis when it comes to the current times that we live in especially in Belgrade, Serbia. Political and philosophical lyrics are evident throughout the music that Nemesis put fourth.

There is not a single message that Nemesis would like to send. Rather it’s more their way to critique and observe things that surround them.

“People believe in lies and well-written stories rather than the truth. That’s because it is easier for them to create their small carefree worlds while the fact is that every day we are being swallowed by consumerism and becoming more estranged from each other”.

Bullett for my Vallentine X Nemesis

Nemesis has many live performances and tours under their belt across both Europe and the Balkans. However, in April of 2019 they opened for Bullet for my Valentine. Then the months following Sabaton at Serbia’s EXIT festival.

“Exit Festival was an amazing experience and at the same time that was our first time playing on the Main stage. Which is amazing since not a lot of metal bends get a chance to play on that stage. Having the opportunity to share the stage with bands that we are inspired by was a dream come true”.

What started off as a coincidence to form an all-female band, soon became an idea to run with. As Alexandra and Sanja started to plant the roots of the band’s beginnings. It wasn’t long after this that Selena joined the lineup, followed closely behind by Tijana and Biljana.

“Our experience is the same, apart from the obvious differences. There is the possibility that people will be more interested when they attend a gig for the first time, and it’s more than likely that being an all-female band will stay in the minds of those that attend”.

On the other hand, they do have to face gender stereotypes revolving around women in music. Especially in the metal scene. In the beginning and still even to this day they get skeptical comments about their work.

Everyone, regardless of gender, can play music.

A strong female voice and influence

Nemesis represents a strong female voice and influence, for all the young girls that want to take part in the metal scene in Serbia. The five of them regularly participate in Serbian Rock camp for girls.

“Always be persistent, believe yourselves and each other, seek support at places where it can be found. There will always be bad comments which should not discourage us from following our passion”!

It’s always important to break the rules and push the limits. Especially if rules are stereotypes and gender is the limit. Then promoting female bands and diversity in music can have a profound influence.

Selena hopes that their work and the work of other female bands in Serbia, will inspire young girls to start playing instruments.

Being a musician in Serbia

It’s never been easy being a musician. Nowadays its 100x harder to make your way and earn a living. A few factors will come into play that can hinder an artist. Such as the location that you base yourself in. Whilst also taking in to consideration of the people that make up a scene, underground or not.

So how can musicians specifically those within the metal support themselves in Serbia?

You can’t! Unfortunately, metal music in Serbia is not really popular.

Nemesis must cross the borders for most of the better-paying live events. All members of the band keep day jobs to support themselves and to invest in the band.

With live events still struggling one tried and trusted way to generate extra income for band expenses is through the sale of merchandise.

Then there’s streaming services such as Spotify and Serbia’s answer to PRS for music, SOKOJ.

While it’s said that you should never have all your eggs in the same basket this is certainly true when it comes to Spotify.

Streaming on the service will generate on average $0.003 USD per stream. Considering the conversion to Serbian Dinar, the cost of time, paid advertising and an equal split among band members. Spotify is only worth looking at it as one tool in an arsenal of social and streaming channels that are used to reach an end goal. After all, you need at least 1 million streams to make any sort of ROI.

To be honest it’s a good thing to reach a bigger audience. But I think that we managed to make more money by selling physical releases.

SOKOJ is an organization that’s been put in place to realize the rights of music authors, lyricists and music producers and other holders of copyright. In essence SOKOJ is similar to PRS for music which pays artists if their published works are played anywhere where a music license is held.

“As most of the Serbian musicians, we are registered in SOKOJ and so is our music. As far as we know, SOKOJ is the only institution where you can protect your original art in Serbia. We believe that they should be upgraded and digitalized to suit the needs of modern artists. Since they are the only ones around, they are the best we have”.

Other than that, there are a few smaller festivals that help new bands to promote their music and offer monetary gain to Serbia’s metal scene. However, most bands just like a lot of places in the world will end up being paid very little if not nothing at all.

The metal scene here is small. We all need to work together and support each other to keep it alive.

In addition to that, Nemesis have been lucky to release their debut “The War Is On” through Grom Records. Grom has supported Nemesis and other bands throughout the years.

Unfortunately, there are no organizations that are helping to support Serbia’s underground scenes. Thankfully the smaller labels like Grom and the hardcore region of metal fans have supported Nemesis and other bands, helping to keep the heartbeat of Serbia’s metal scene alive.

The “new now”: how did the Pandemic affect live shows?

Out of all the industries that have been affected, live music and the people that are involved within the music industry have been hit the hardest.

For Nemesis there is no difference, just like the countless others that have felt the knock-on effect of cancellations and lost revenue around the world.

“We had to cancel a huge number of gigs, festivals and tours. We did play an online show once, which went pretty well, but it can’t compare to live shows in front of our audience.”

“It’s not the strongest or the most intelligent who will survive, but those who can best manage change.” – Charles Darwin

Choosing to adapt, Nemesis focused their time and energy on the creative process. Their sound, creating new songs, preparing a new album, and shooting a new video for their latest single The Scales of Fate. 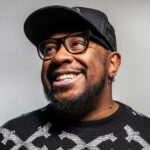 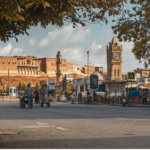