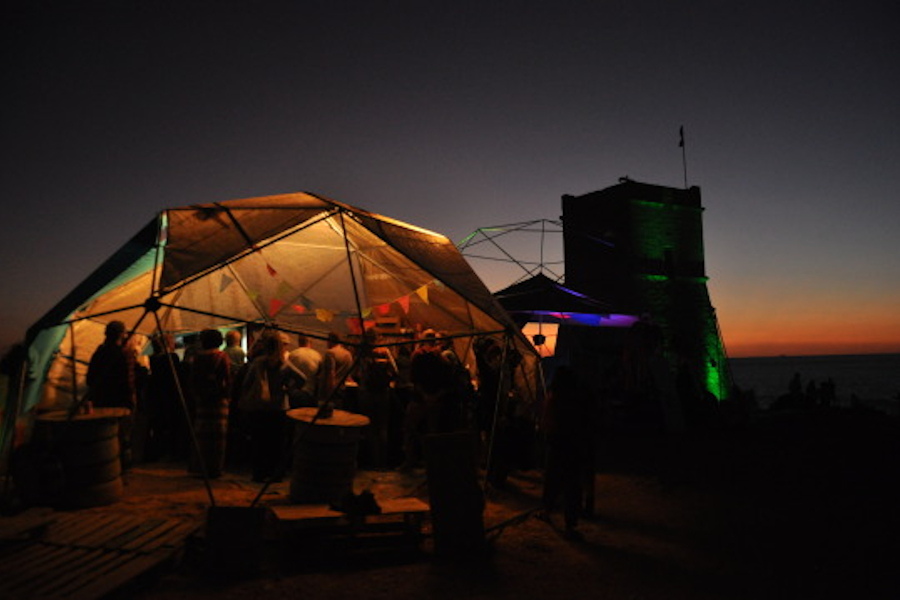 Originally designated the ‘The Festival of Light,’ here is a different take on Malta’s most original alternative get-together which takes place over a week from 18-25 September on the west coast of Malta.

Rather than light, it was earth, wind, fire, and water that led me to a truly genuine gathering of hearts and minds. Here’s the agenda:

The Bubble takes place every year on a rocky piece of farmland on a tall cliff overlooking a vast expanse of the Mediterranean Sea. A sparse grove of pine trees with paths crisscrossing around them leads to a tall stone watchtower.

At Lascaris tower – one of the original outposts built by the Order of Saint John in 1637 to watch over the shores of Malta and Gozo. At the Bubble, this tower’s new purpose is to host a variety of talents throughout the week.

Not far away, camping areas are sectioned off by agricultural slots where campers can lay their claim. Stage areas are built from recycled materials – basically anything the organizers can get their hands on. Eco-friendly showers are built to reduce the impact on the land and there are sorted trash bins and tin cans for cigarette butts to encourage a mindful presence.

A special shout out to the Zibel for helping to keep the place clean – they have such respect for the land many of us call home.

Exposed to the western wind, the Bubble’s location at the heights of the cliffs means an occasional gust sweeps in, threatening to pick up tents and toss them out to sea.

Located where the land ends and the sea begins,

it feels like you are on the edge of the world, where you place daily life aside and create an alternate reality among strangers and friends alike.

At the Tower Stage, a variety of performances take place, notably collaborations held by Soul Movement. They helped us discover Yonity, an alternative, jazz, soul, drum, and whatever-genre-it-falls-into group led by Cécile with her beautiful multi-lingual voice.

We also think of the Gypsy Jam led by Marta that brought us the sweet sound of the Balkans in a very fervent manner.

Soul Movement blesses us nightly with original jam sessions once the main performances finish by midnight. With talented musicians and an eager crowd, we roll onwards into the night and early morning.

Sometimes the wind turns a small flame into a blaze and that’s exactly what happened from Wednesday night – creativity flared skywards. Night falls at the covered Pine Stage and Duncan F and his mate Alex Thomson take the cake.

They bring us to a whole other level with electronic sounds mixed with vocal effects, Native American headgear, and a very appealing performance by three lovely ladies, bodies painted head to toe.

Suddenly Kieren appears – otherwise known as Dingo – who proceeds to spin fire with his mighty baton. Regardless of being in a closed area with pines on all sides, the man manipulates fire like a pro. This lad is a multi-instrumentalist, fire-performing artist who is simply a blast to be around.

Hailing from the faraway land of Australia, he joins the circus at the age of 19 and ends up branching out to travel and perform around the world. He is currently at 42 countries and counting. His instrument of choice?

The handpan, a mystical instrument that he builds and plays himself. It dispels a lovely tune at the touch of your fingertips.

You can check out his gear on his Facebook page, Pan Chameleon. Dingo’s favorite act? We’re getting to it.

From fire comes smooth flowing water… and speaking of flow, we find it once again at the Tower Stage on Saturday night. Put together drummers, didgeridoos, rhythm guitars, a surprise performer and bam! You have a proper jam session.

It is a performance that blows both Dingo and I away and goes a little like this:

Music is fully underway and we are an hour past midnight.

Nearly a half dozen people are playing drums and guitar onstage with no sign of stopping. It is nowhere near an out of control night – people mill around soaking in the tribal atmosphere, smoke rises from the carpeted seating area and all is swell.

Then out of the darkness emerges AJ from Baltimore, Maryland. In his hand he holds a microphone.

Wearing a simple red hoodie and a blank look on his face, he begins to lay down the best freestyle I have ever heard on this side of the Atlantic. AJ is the cause, hype is the effect and the crowd responds with euphoria.

People begin flocking to the metal barriers separating the plateau from the steep abyss.

Distant lightning strikes illuminate the Mediterranean for as far as the eye can see.

Speculation that an oncoming storm is brewing was heard from early in the week, but nobody expects it to come in like this. Stories of last year’s deluge are exchanged – the weary leave and the curious stay, eyes glued on the flashing horizon.

It is the wee hours of the morning that the dedicated few remain, sprawled on and around the stage. The omnipresent cloud envelops us from the west, and the dim light of day appears in the east.

The first drops arrive gently and then someone flips the switch. The liquid element falls and a whole summer’s worth of rain is dropped on our heads. Morning has arrived and thus was the end of The Bubble 2017. 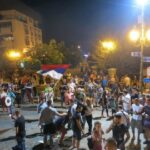 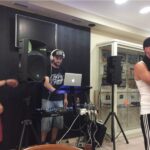