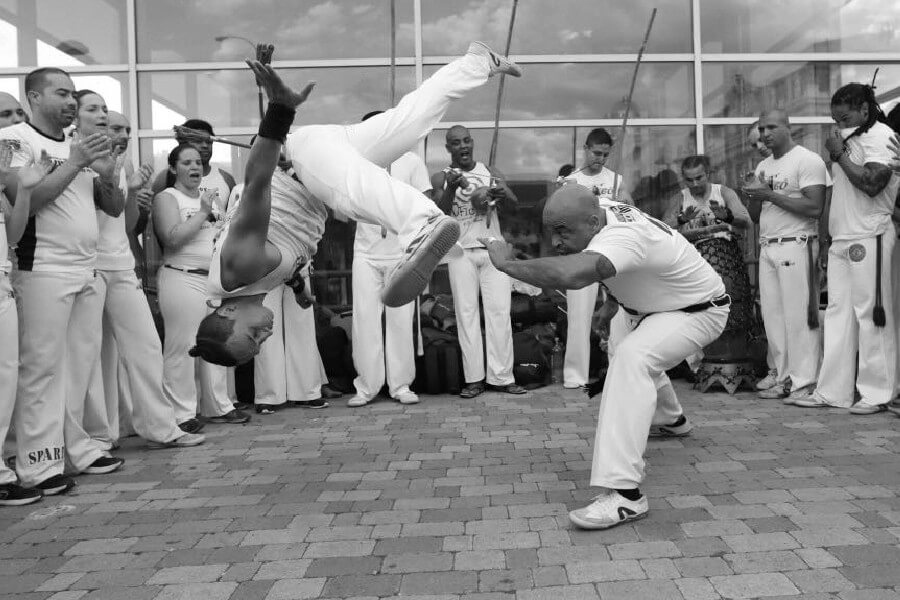 I spent a week living, eating and training Capoeira in Brazil with skilled athletes in the heart of Goiania.

Originally a covert fighting system, slaves used Capoeira to rebel against their masters. Today it is a truly Brazilian martial art and national sport. Over a week, I discover there is a lot more to Capoeira than fancy-looking flips and ripped upper bodies.

Lush hillsides and expansive valleys. Lost farmlands and the odd toucan. Three hours bus ride from the capital city of Brasilia and I arrive in Goiânia, city of 1.5 million people.

Despite feeling far away from everything, Uber comfortably gets me from the bus terminus to Academia Nagô. As I step into the gym, they recognize my Nagô Malta shirt and I receive a very warm welcome – capoeiristas are like family.

Created and led by Mestre (Master) Pequines since 2001, Academia Nagô is a martial arts center. There you can train Brazilian Jiu-Jitsu, Judo, Boxing and Muay Thai. Capoeira, is their most popular offering.

There are clubs of Nagô in major cities in South, North America and Europe. Every two years a world championship is held here in this central Brazilian city. But how did an academy based in far out Brazil manage to reach global proportions?

Capoeiristas (and Brazilians in general) are great at networking. Through friends and connections Mestre Pequines was able to expand Capoeira Nagô throughout Brazil and to other continents entirely. But as I find out, it’s never a walk in the park.

Some say take it easy on the first day. Instead I’m in for a three-hour session.

The level here is higher than anywhere else I have trained. Upper belts are agile, skilled and have been training since the age of 9. Having started at 25 I feel slightly disadvantaged.

Training in pairs, we separate technique practice with bouts of running. It keeps the muscles loose and avoids the draining feeling when you stop. We then form into lines according to belt and copy the movements of the Mestre.

His energy is unbeatable – with every move he commands the group with a battle cry. He shouts at those with weak form (yours truly) and eggs on the group to widen their stance and strengthen their movements. With him in front of the group, it is easy to push your limits.

Meaning “make yourself at home,” this is the epitome of Brazilian hospitality.

Mestre Pequines gracefully invites me to stay at his place, however he is still teaching in Colombia when I arrive. I am told that I am going to stay with Nana. He is a kind soul who also trains at the club. Once the three-hour session is over I am handed a helmet.

The night air is sweet as ever on the back of the Honda. We ride through 12 kilometers of Goiânia’s expansive city before reaching his humble home. I am fed, watered and given a place to sleep.

Another day, another sport. I’ve always admired capoeiristas for their openness to cross train. Most Capoeira instructors will more than often be trained in Brazilian jiu-jitsu or some other deadly practice.

In my case, I’m pulled into boxing class and then BJJ. Both run by Negueba, a competing UFC fighter (whose just won his latest bout in Rio).

Mestre Pequines has now arrived and takes me to his local gym where we put in some time in lifting. He is certainly well known here, that is for sure.

He gets all the greetings and stops often to talk to people in shops, at the gym, wherever really.

Walking alongside the Mestre, he gets wind of my açaí addiction (açaí is a purple fruit, like a South American blueberry) and takes me to his local café. This half-frozen goodness is revered in the capoeira community and by Brazilians as a nation. During my time here I consume on average a liter of the good stuff every day.

Sweets aside, Goiânia is known for being the capital of cerrado or savanna country. Basically, it means they produce a lot of good red meat. So much in fact that in five days I have honestly forgotten what a vegetable looks like.

Mestre Pequines and his wife Catalina take me out to eat churrasco. It’s the restaurant concept that allows you to eat like you’re directing traffic. So it’s green for more meat, red for “please make it stop”.

After a night of digestion, I’m on my last day. And Mestre Pequines insists on a strong ending involving a capoeira roda or circle that involves a demonstration of skill. Kicks, flips and unbelievable aerials.

Does gravity work the same way in Goiânia? With all the great energy I end up surprising myself with the skills I have learned while I’m here.

With a great roda, comes a great hunger. The guys set fire to the barbeque, smack kilos of heavily salted beef on the grill and order chilled booze to go around.

If finishing off the steak and killing the beer makes me a great capoeirista, then I’m in for life.

A big thanks to Mestre Pequines and Nana for hosting me in Goiânia. 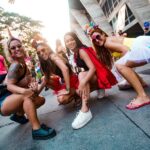 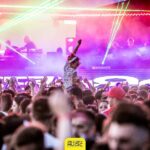